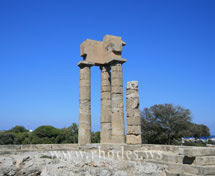 The Acropolis of Rhodes, in contrast with the acropolises of most of the ancient Greek cities, wasn’t built in order to secure the city from its enemies. Located in the west, on the highest spot of the city, it used to be in fact a place of great cultural, educational and religious significance. On the acropolis used to stand various public buildings, temples, educational centres and monuments.

Most of those buildings had been built in the Hellenistic period, in the 2nd and 3rd century B.C.

The place itself was also a typical example of Hellenistic architecture, with the general design of the acropolis being built in a piecemeal reform of various levels and the artificial interventions fitting to the natural beauty of the landscape.

In the area of the Acropolis excavations and reconstructions used to take place systematically from the beginning of the 20th century in order to discover as many monuments as possible.

This is the reason why the surrounding area has been excluded from further building in order to allow further excavation of the area in the future.

Until this day lots of monuments of incomparable beauty have seen the light of day, such as the Temple of Pithios Apollo (the god protecting the city), a temple dedicated to Athena and Zeus, a small marble Theatre (where theatrical performances and other cultural events still take place) and the Hellenistic Stadium.

On the east side of the Stadium there is the Gymnasium and near that the Library and the Conservatoire.