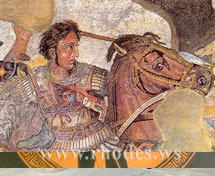 The destructive Peloponnesian War, however, had significantly enfeebled all cities that were directly or indirectly involved and as a result, in 357 B.C., the island underwent an attack and was conquered by king of Alikarnassos, Mausolos. Later on it fell to the Persians, but not for long, as after the successful march of Alexander the Great in Persia, Rhodes became in 332 B.C. a part of his empire. After the death of the great general, his successors, Ptolemy, Seleukus and Antigonus made an attempt to distribute its kingdom amongst themselves. Rhodes then developed strong commercial and cultural relationships with the Dynasty of the Ptolemies of Alexandria and a new era of great flourish began for the island. Rhodes became famous for its excellent nautical centre and the most renowned of all rhetoricians, philosophers, astronomers and natural philosophers used to teach in its celebrated schools. Antigonus however, after the distribution of Alexander’s Empire had become King of Syria and was noticing that his interests in the area weren’t served well enough, since the Rhodo-Egyptian alliance had control over the trade in the entire Aegean Sea. Keeping the idea of a future invasion in Egypt in the back of his mind, Antigonus then sent his son, who was none other than famous Demetrius the Besieger, to conquer Rhodes. But even Demetrius failed in his mission and as he was departing from the island in a hurry, left behind all of his renowned military equipment. The Rhodians later on sold Demetrius’ besieging machines and by the funds raised the built a huge bronze statue, the most famous “Colossus”, in order to express their gratitude towards sun-god Helios, who, as they believed, was protecting them and had helped them to push back the enemies’ attack.