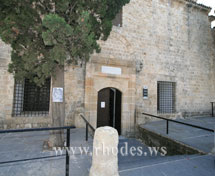 It is located on Arionos Square, in the old town of Rhodes and used to be among the most significant public baths in the years of the Ottoman Empire. It is also known by various other names, such as “The Baths of Suleiman”, “The Baths of Mustafa” and “Yeni Hamam” (which means “new baths”). It was established in 1558 and its first department was the men’s baths, a square, symmetrical structure that used to dominate the entire block. The rest of the baths were added later, in the years of the administration of Pasha Mustafa. Those new baths tend to slightly loosen the symmetrical severity of the set. The interior is even more impressive, especially the “cold room” with its huge dome, its rich marble decorations and elegant central water spring. The baths have been recently innovated and are now once again open for the public.