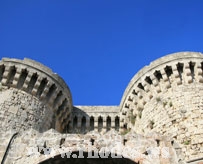 1. The Kollakio or Kollako to the north, including the Street of Knights, leaders, the Palace of the Grand Master (Castello), the official churches of the Order, the Hospital (today\'s museum), and other edifices. This area was separated from the rest of the town by inner fortifications, sections of which are still preserved.

2. The Burgh or Hora to the south, with the old market (Socrates Street) and Turkish bazaar around Suleiman\'s mosque, and other sites. Hora was the area for the bourgeois, and the Greeks, as well as other nationalities (Jewish, Turkish and others) each lived in their own districts.

The main Gates to Rhodes Old Town are:

• D\'Amboise Gate to the north-west, took its final shape in 1522. This gate is at \"Platanakia\" (meaning small plane trees), and you enter the Old Town over a narrow bridge and a section of moat.
• Saint Athanasios Gate to the south-west, built in 1441-42.
• Koskinou Gate, to the south. It is also known as Kokkini Porta (Red Gate) because of the tradition that there was a slaughter there during the town\'s capture by the Turks in 1522.
• Agia Aikaterini (Saint Catherine\'s) Gate, leading to the harbour. It is known to been known there since the 15th century.
• The Sea Gate (Porta Marina), the most beautiful of all the gates. It was built in 1478 and stands facing the central harbour.
• Agios Pavlos (Saint Paul\'s) Gate to the north, leading to Mandraki. It was built in the middle of the 15th century. Close by is the ruined tower of Naillac. Originally an impressive construction 46 metres tall, was destroyed by a strong earthquake. Today only the foundation courses are preserved.
• Eleftheria (Liberty) Gate was a later addition by the Italians (1924), and is part of the main entrance from Mandraki to the medieval town (Symi Square).

The Medieval Town is a living monument, an exquisite museum if you like, that has much to reveal to the visitor. Every corner, every street, every building has its own history, and so it is understandable that a \"guide\" will confine him or her self to the best-known sights. They will have time only for some key historical facts, leaving visitors, perhaps with the help of some more detailed or specific information, to discover by themselves, walking along the narrow maze of streets, a taste of the Old Town that we cannot give in the course of our short \"tour\".

Also In Argyrokastro Square is one of the oldest and most beautiful buildings in the medieval town - the old arsenal of the Knights - which today houses the Folk Art and Folklore Museum.

On show are various exhibits from the past, such as the Rhodian \"sperveri\", a hand-made curtain of asbestos cloth and silk surrounding the nuptial bed. Other treasures include plates from Rhodes and Byzantium, local costumes, furniture, and various traditional household items.