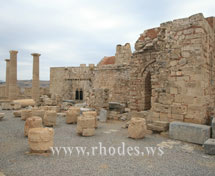 One of the most characteristic sights of Lindos is undoubtedly the Temple Of Athena Lindia, in which there is the base of the statue of Athena. Many interventions occurred to the temple until it attained its final form in 300 BC., including the addition of buildings and the enlargement of the precinct. All those were almost completely destroyed, however, during the Middle Age, when the Knights layed up the building that fell into disuse and built over them a fortress to protect the city from the Ottomans.

Things that can be seen today in the acropolis of Lindos include parts of the Dorian Temple of Athena in which the base of the statue of Athena can be found. There also is the Hellenistic arc with its 87 meters of length and 42 columns. In the foot of the steps leading to the acropolis the visitor can see a famous relief of a Rhodian trireme carved into the rock, dating back to 180 BC. The staircase was constructed in the 2nd century BC. All the building of the acropolis are surrounded from a wall, which also dates back to the Hellenistic years. In addition, there is the Greek orthodox church of Saint John as well as a fortress built by the Knights on the edge of the cliff, both constructed around the 13th century AD. In the Knights’ fortress used to be several towers, but only the west and the north-west tower stand until this day.