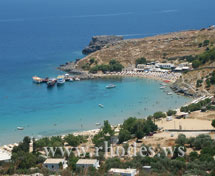 2006 turned out to be a particularly successful year for the tourism of Rhodes, as it raised 13%, creating obvious optimism for the forthcoming tourist season of 2007. During the months of July and August the complement of the big hotel complexes approached 100%, despite the fact that charter flights to Rhodes were decreased. Even in September, a month when those percantages traditionally decrease compared to those of July and August, hotel complement was maintained to rather high levels, due to various conferences that took place.